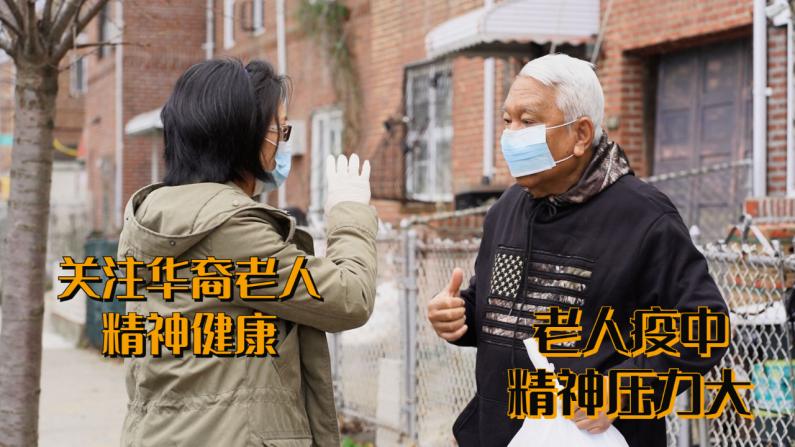 "The pandemic has lasted for so long. For the elderly and their families, there is a great mental stress." Lina Chen, the head of the HappyHouse Adult Daycare Center in Brooklyn, expressed her worrisome of their senior members.

Lina, who has been engaged in community service work for a long time, started the Happy House Adult Daycare Center in 2012, providing living care and entertainments for Chinese American elderly living near U Avenue in Sheepshead Bay, Brooklyn. "We had about 100 members at peakwere here, there were about 100 members. Everyone is of Chinese descent from different countries. They speak different languages like Chinese, English, Cantonese, Vietnamese, Indonesian and so on." Chen Lina said that the center is not only to provide lunches to the members, or helping them deal with documents, it also arranges many activities regularly: "We have English class on Mondays; Zumba dance on Tuesdays; we sing folk songs on Wednesdays; Cantonese opera on Thursdays; and practice Tai Chi and Qigong on Fridays. There are also dance and qigong classes during the weekends." The center also brought members out for field trips. Staff took many photos for the seniors and posted them on the walls.

The pandemic started from March last year changed the lives of all the elderly and made the operation of the senior center severely difficult. "In the beginning, none of our staff were able to come to work." Lina recalled that everyone was very nervous about COVID at that time. Fortunately, she learned from the experience of people in mainland China deal with the pandemic. Lina said she prepared PPE in advance and also stocked a big amount of foods. When the government announced the closure of many businesses including senior centers and restaurants, the Happy House could still deliver meals to members in need.

The pandemic lasted longer than anyone expected. "This pandemic has brought a lot of mental pressure to the elderly and their families." Lina said. When they delivered meals to the elderly they found that their members were much aged because they are trapped at home and lack of exercises and communicating: "Some of the seniors who were on crutches are now in wheelchairs, and some are experiencing deteriorated motor functions in the legs. But more importantly, this is a very hard time for our members mentally. “Our members used to come to the center regularly, there were friends, activities, and that provided mental support for them. Now they are counting their days. Some members will call the center more than a dozen times a day, asking when the center will open and when can they return to the original days.” Lina said.

"We are now providing some remote services to our members, like calling them to play games to ease their anxiety." Lina said that despite the difficulties, many elderly people still try to stay optimistic and maintain the pace of life. Both Mr. Oo and Mrs. Oo are members of the center, and they live on the street less than 5 minutes away from the center. "I am very worried about the virus. I watch TV news every day. I want to protect myself and my family." Mr. Oo said. Mrs. oo said that even though they could not go out, the couple tried their best to find the joy of life: “Cooking, cleaning, entertainment, my husband with me, we listen to music, watch movies, and exercise.” Madam Gu, whose husband passed away about a year age miss the center even more: "I really like going to the center because there are many old friends and there are singing competitions. I always win the championship."

"In fact, we ourselves are counting the days, struggling to survive as well." Lina sighed. She said that since the beginning of the pandemic, the funds provided by insurance companies to the center have been reduced by 70%, and some insurance companies are not even willing to let the center provide Chinese meals for the elderly. "Some companies have their own contracted food delivery agencies to deliver American food, but each culture has different eating habits. Many Chinese seniors are used to Chinese food, they still want to eat Chinese food." Lina said the center received government subsidies for small businesses, but far from enough for running a big spacious place like HappyHouse adult daycare center. "I really hope the pandemic will be over soon." Lina said.

Sponsored  by The Gerontological Society of America, The Journalists Network on Generations and the Silver Century Foundation
赞助鸣谢：美国老年学会，代际记者联盟，银发世纪基金会
采访制作：曹旋律 Melody Cao